Also known as the "Poor Men's Bible," the Biblia Pauperum was a simple picture book used to explain biblical prophecies and symbolism. These volumes served as an aid for preachers to demonstrate the unity of the Bible. The iconography of these popular books juxtaposed two Old Testament scenes with one from the life of Christ. In this example, the image of Christ crowned with thorns on one side and Christ carrying the cross between Abraham and Isaac on the way to sacrifice (on the left) and Elijah with the widow of Zarephath (right), on the other side. The Biblia Pauperum appeared first in manuscript form in the 1200s, became a popular picture book with miniatures in the 1300s, and after 1450 it emerged as a print book with woodcuts. 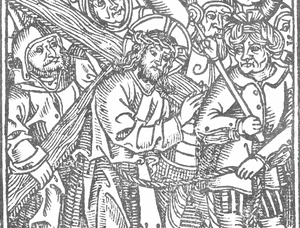 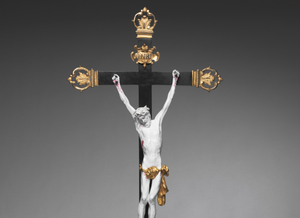