This scene was designed by the court historian and astronomer Johannes Stabius (1450–1522) shortly after Maximilian’s death in 1519. The print shows holy Roman emperor Maximilian I (1459-1519) kneeling before God. Maximilian is wearing the imperial crown and a robe which is decorated with jewels and the imperial eagle (his regalia are set on the pillow before him). The text scroll from the mouth of Maximilian reads: "Moreover, you O Lord are my supporter. You are my glory and you glorify my reign". The emperor is introduced to God by Virgin and Christ Child and his patron saints: saint George, patron of the order of Saint George; Andrew, patron of the order of the golden Fleece; Maximilian of Celeia (also Maximilian of Lorch), his name saint; Sebastian, patron of Archers; Barbara, patron of artillerymen; Margrave Leopold III of Austria, patron saint of Austria. The saints intercede on Maximilian's behalf by reminding god of the emperor's virtuous character and many good works for the Church. the text scroll above the saints reads "Lord save the King and listen to us this day in which we invoke you." God himself stands within a triumphal archway and blesses the emperor with the text scroll "I came before him with sweet blessings, and on his head I placed a crown of precious stones & I caused Him to rejoice at the sight of my countenance". The text at the bottom list all the official titles of emperor Maximilian, his death date, length of his reign, and an enumeration of his princely virtues. 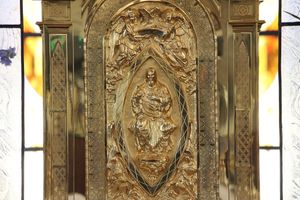 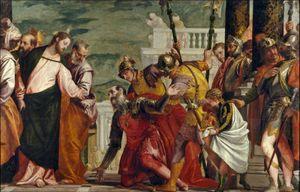