In the story, a father has two sons. The younger son asks for his portion of inheritance from his father, who grants his son's request. This son, however, is prodigal (i.e., wasteful and extravagant), thus squandering his fortune and eventually becoming destitute. As consequence, he now must return home empty-handed and intend to beg his father to accept him back as a servant. To the son's surprise, he is not scorned by his father but is welcomed back with celebration and a welcoming party. Envious, the older son refuses to participate in the festivities. The father tells the older son: "you are ever with me, and all that I have is yours, but thy younger brother was lost and now he is found."

Following the Parable of the Lost Sheep and the Parable of the Lost Coin, this is the last of three parables about loss and redemption that Jesus tells after the Pharisees and religious leaders accuse him of welcoming and eating with "sinners." The father's joy described in the parable reflects divine love: the "boundless mercy of God," and "God's refusal to limit the measure of his grace." 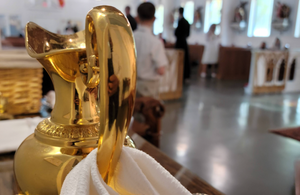